You are here: Home / All stories / Women’s work and play

A WIDE RANGING SAMPLE OF HOUSEHOLD PRODUCT PACKAGING AND PROMOTIONS ON VIEW HERE in a recent box of ephemera.

This envelope style packet. 22.5x15cm, can be dated to 1938.  There are two distinctive elements to the lettering –  KAYSER and then MIR-O-KLEER which use different font on this packaging and also use different font over the many years when these stockings were marketed. it may be that other readers can also see that the woman’s hair, make-up and jewellery would assist with dating. 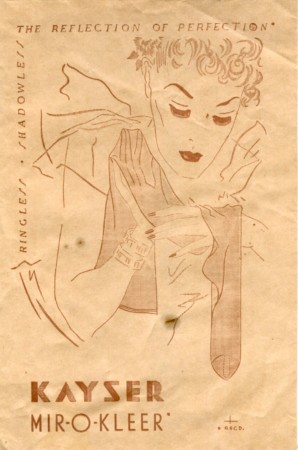 A small number of advertisements for this product appear in 1943, 1944 and 1949. The reference to saving coupons on the back of the packet, 7.8x13cm,  confirms this as a post war product. Look forward to protecting ‘silks’ and ‘undies’. 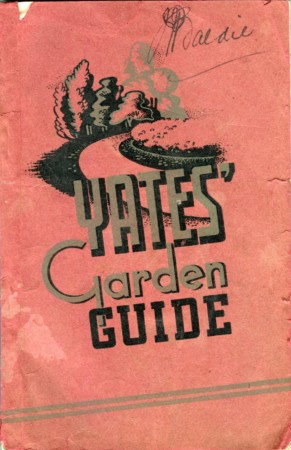 This is the 24th edition, published in 1948, of the Garden guide. Published in Sydney, by Arthur Yates & Co., the company began in England in 1826 and established an Australasian business in 1883. The guide concludes with a pronunciation guide and plant quiz. A quick look shows some concessions for an Australian audience – for example, the chapter on glass and bush houses begins by noting that glass houses are not as necessary in the local climate.

Wikipedia advises that this beautiful typewriter was first produced in 1950.

The Olivetti Lettera 22[oliˈvetti ˈlɛttera ventiˈdue] is a portable mechanical typewriter designed by Marcello Nizzoli in 1949 or, according to the company’s current owner Telecom Italia, 1950.[1] This typewriter was very popular in Italy, and it still has many fans. It was awarded the Compasso d’oro prize in 1954. In 1959 the Illinois Institute of Technology chose the Lettera 22 as the best design product of the last 100 years. The typewriter is sized about 27x37x8 cm (with the carriage return lever adding about 1–2 more centimetres in height), making it quite portable at least for the time’s standards, even though its 3.7 kg (8.2 lb) weight may limit portability somewhat.

The model was eventually succeeded by the Olivetti Lettera 32.

It was available pretty promptly in Australia with advertisements appearing in 1951.
1960s
This Avon Calling folded brochure uses the same pictures and some of the same text of the Avon advertisement in the Australian Women’s Weekly  Wednesday 2 October 1963, p76. Mrs Ford of Nth Essendon had joined as an Avon representative.
1980s
This German vacuum cleaner was marketed in Australia, and the instruction leaflet is lengthy, stapled, 28 pages ; it concludes with what seems to be a dangerous idea – using the features of the fan to make a hairdryer.

Looking for assistance? Contact the ESA with your research and collection inquiries. Our membership base consists of highly knowledgable experts and enthusiasts.     … END_OF_DOCUMENT_TOKEN_TO_BE_REPLACED

Applications for stalls open on 1 August 2022. OUR NEXT FAIR IS ON SUNDAY 18 SEPTEMBER 2022 The fair is usually held at the Parkview Room, 340 Camberwell Road Camberwell Victoria. It is part of … END_OF_DOCUMENT_TOKEN_TO_BE_REPLACED

Benefits of membership - two journals and four newsletters each year; early bird access to the fair; member rates at ESA events and the joy of being part of a society of like minded collectors. When … END_OF_DOCUMENT_TOKEN_TO_BE_REPLACED