You are here: Home / All stories / Unprecedented #3 reporting infectious diseases 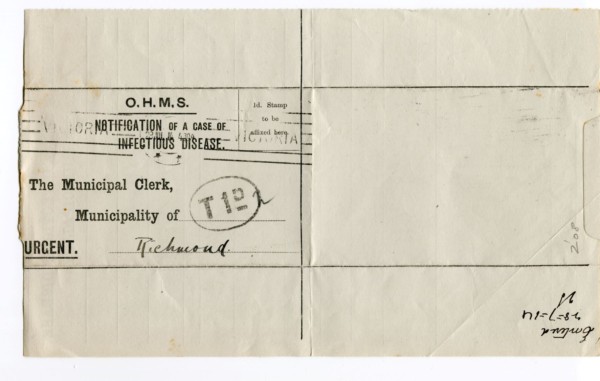 This time we draw on the collection of Ed J. for notifications of infectious diseases.

It seems the idea of mandatory reporting came to public attention in the 1880s:

In a former report I brought to the notice of the Council the desirableness of instituting a system of notification of infectious disease; such a system, combined with early isolation, is an imperative necessity. It stands to reason that some such provision should be made. It is extraordinary that so much more regard should, be paid to the lives and health of cattle than of human beings. I have known epidemics of foot and mouth disease in England, and there is now unfortunately one spreading through the country, and what do we see? Placards with notices on every field gate where the disease exists… But should, typhoid fever, or any serious epidemic arise, as a rule the fact is hushed up as long as possible, and when it does leak out every attempt is made to make light of it: and oven the most flagrant cases of rash exposure, resulting in the spread of the disease from one person to another, are unnoticed, and medical aid is not called in till the case may have become hopeless…..Launceston Examiner, 22 July 1884, p. 3.

Later in 1884 a resolution was passed to make notification compulsory in all colonies and ensure that all the colonies’ quarantine acts were consistent.

Report of disease in Richmond with the medical practitioner advising the patient had been sent to Fairfield, which was a newly opened hospital:

The Age (Melbourne), 19 August 1904  p. 6: The work of furnishing the Queen Victoria Infectious Diseases Hospital buildings at Fairfield is approaching completion, but other preliminaries which have to be attended to before patients can be received into the institution for treatment are hardly likely to be completed before the lapse of a few weeks. At a meeting of the committee of management which was held at the Melbourne Town Hall yesterday Gr. Cabena asked the chairman (Alderman Strong) if he could give any idea when the hospital would be opened. The acting secretary (.Mr. E. M. Tonkin) vouchsafed the information that the furniture would be in the place in another week. ….

Detectives -note the inconsistency little Harriet was sent on 25 July 1904 when the hospital was not completed according to the newspaper report….. 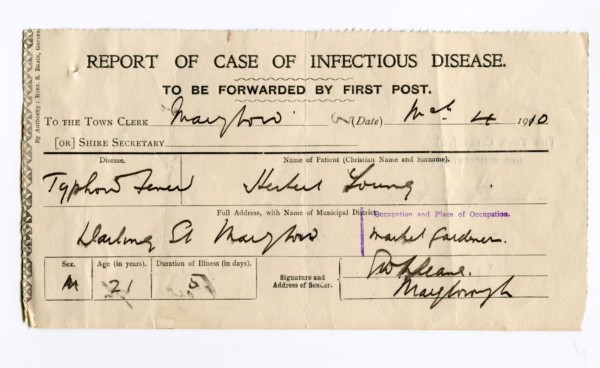 The Age (Melbourne), 15 April 1910 p. 6: Typhoid, fever is spreading in Melbourne, and at the present time no fewer than 40 cases are scattered through the wards of the Melbourne Hospital. The source of the infection is not known with certainty, but it is understood that the Board of Public Health is following up a clue which points to a tainted milk supply in one particular direction. The fact that typhoid is admitted indiscriminately to the wards of the central hospital is a matter of grave importance, for it forms an ever present danger to the other patients. Recently a nurse in the hospital, who contracted the malady in the course of her duties there, died of it. The question of providing isolated accommodation for typhoid patients is one frequently brought up in the medical superintendent’s report, but so far without effect. The only infectious diseases treated at the Infectious Diseases Hospital are scarlet fever and diphtheria while typhoid, as great a scourge as either, for want of proper and reasonable accommodation, is allowed to endanger the the lives of patients in the general hospital….

This less formal notice was presumably for the non afflicted person to carry around. (The Army defined vermin as Vermin are ‘harmful insects or parasites that live on humans or animals’.)

This is probably a military clearance given on return to Australia.

Service men and women being repatriated to Australia were categorised as either:

Cot cases tended to be transported in a hospital ship, in a cot. The others mainly travelled home on the ‘black ships’, sleeping on hammocks or double-tiered berths.

Looking for assistance? Contact the ESA with your research and collection inquiries. Our membership base consists of highly knowledgable experts and enthusiasts.     … END_OF_DOCUMENT_TOKEN_TO_BE_REPLACED

Applications for stalls OUR NEXT FAIR IS ON SUNDAY  26 September 2021 HAS BEEN CANCELLED. The fair is usually held at the Parkview Room, 340 Camberwell Road Camberwell Victoria. It is part of the … END_OF_DOCUMENT_TOKEN_TO_BE_REPLACED

Benefits of membership - 2 journals and 2 newsletters each year; early bird access to the fair; member rates at ESA events and the joy of being part of a society of like minded collectors. When you … END_OF_DOCUMENT_TOKEN_TO_BE_REPLACED