You are here: Home / All Posts / The Queensland exercise book

ONCE PEOPLE UNDERSTAND YOU ARE A COLLECTOR, THE NEXT QUESTION IS ALWAYS – ‘What do you collect?’ Followed by the more difficult ‘why do you collect that?’ 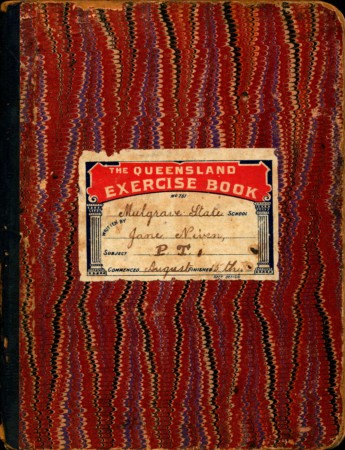 As we all know one of the best parts of the Ephemera Society is seeing what others collect, and spending a few minutes or hours being intrigued by just how interesting that are of collecting is. 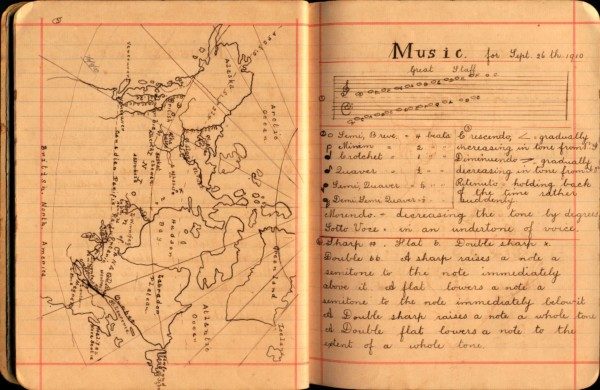 Assistant teachers had pupil teachers to help. Pupil teachers were usually twelve year olds, who wished to pursue a career as a teacher. They were generally the ‘bright’ student whose parents could afford the luxury of the child not bringing in a great income, and who could support such by maintaining them either at home, or in some cases paying their board and lodgings if they were billeted out to country areas. Mostly the pupil teachers seemed to descend from teaching families…..

Intelligent boys and girls were encouraged to stay at school by offering them positions as monitors. After turning thirteen years old they could be hired as pupil teachers…to qualify they had to be at least thirteen years of age and not subject to bodily infirmity likely to impair their usefulness as pupil teachers. Candidates were also required to read with a fluency of ease and expression; to write a neat hand, with the correct spelling and punctuation from a simple prose narrative read to them; to write from dictation sums in the first four rules of arithmetic, simple and compound – to work them correctly and to know the tables of weights and measures; to point out the parts of speech in a simple sentence; to have the elementary knowledge of geography…to teach the class to the satisfaction of an inspector…

In addition to helping in the classroom, pupil teachers often received evening lessons in secondary subjects and when they reached eighteen, they could pass examination (and attend training college to earn a teaching certificate)…
Like a phoenix arising from the ashes: a sesqui-centenary history of Preston’s oldest functioning government school 1866-2016, S Ormes-Sawyer (2016) 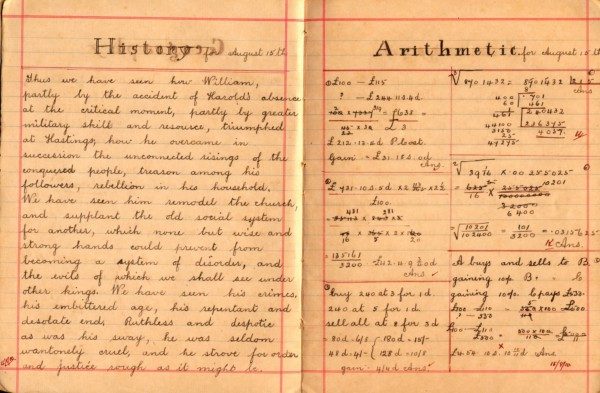 This book comes from the collection of ESA member JY whose interests include education. Jane Niven taught in Mulgrave, Queensland and this exercise book is for classes in 1910.

GORDONVALE, Dee. 15.- The annual breaking-up of the Gordanvale State Rural School on Wednesday, December 10, was, this year, an event of more than ordinary importance, as the occasion was used to celebrate the 50th-anniversary of the opening of the school.

The first provisional school was opened on March 15, 1897, near the site of the present cemetery because, at this spot, it would serve the two townships of Packer’s Camp and Mulgrave. The first head teacher was Mr. Robinson, but he was replaced soon after by Mr. Gillick who stayed for some years until replaced by Mr. Letch.

The provisional school was closed In 1901 and a small State school opened on the present site in 1902. The name was also changed from Mulgrave to Nelson and, later again, to Gordon-vale. The enrolment on the opening day was 34. Today it is 312 and this indicates the way the district has progressed in the 50 years.

The celebrations this year followed the usual lines until 3.30. Sports were held in the morning with fairly fré-quent balta for refreshments. After, lunch, the infants’ section of the school had their usual concert and Christmas tree. The arrival of Santa Claus caused much excitement and merriment.

At 3.30, the scholars were assembled on the parade ground.. The head teacher  welcomed the visitors and read the roll of 1897 scholars. Unfortunately, the old roll was so frayed that two names, Annie Sorensen (Mrs. C Sondergard, Gordonvale) and Eugene Gallet were unrecognisable, and could not be included  in the list that had previously been sent out on the invitation….

Afternoon tea was than served, the 1897 scholars as well as a few original scholars of the neighbouring school at Wright’s Creek and one of the early teachers teachers (Miss Jane Niven, now Mrs. Haggard, of Babinda) being seated at a special table…. Cairns post 17 December 1947. 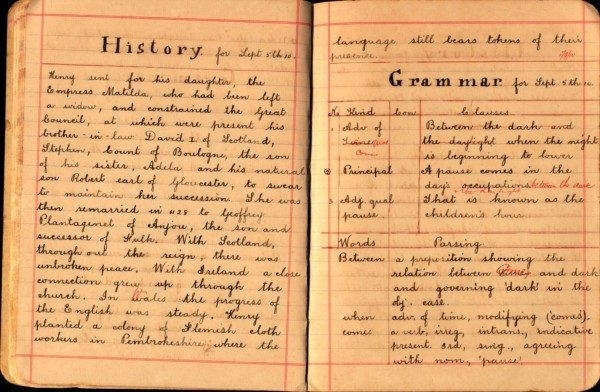 The corrections in red can be seen here, presumably by a supervising teacher.

Looking for assistance? Contact the ESA with your research and collection inquiries. Our membership base consists of highly knowledgable experts and enthusiasts.     … END_OF_DOCUMENT_TOKEN_TO_BE_REPLACED

Benefits of membership - 2 journals and 2 newsletters each year; early bird access to the fair; member rates at ESA events and the joy of being part of a society of like minded collectors. When you … END_OF_DOCUMENT_TOKEN_TO_BE_REPLACED