You are here: Home / All Posts / Political postcards, artist postcards – a case study 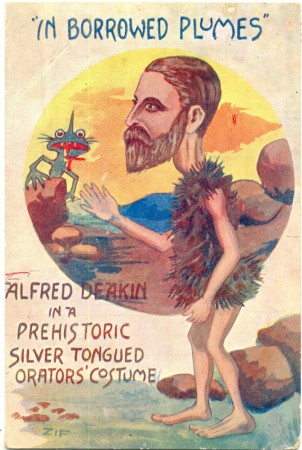 We asked a member about this valuing this postcard and he advised:

This postcard is by one of the minor Australian artists who were working in the early 20th
century providing their work to various publishers in the hope of being accepted. These comic cards have never gained great heights as far as price is concerned except of course for the more renowned artists whom provided art for the Bulletin, the likes of the Lindsay family, Souter, Lambert etc.
However this card has a certain je ne sais quoi that I find charming and I would probably put $30 on it. You may find the publisher’s name on the left hand rear edge or possibly a monogram on the centre top rear.

An internet search found this information from the Museum of Australian Democracy:

Zif (George Duncan), c. 1908 – Although ADB entry for Alfred Deakin was the greatest Australian political orator of his day, and a key voice in the Federation movement of the 1890s, he had his fair share of enemies as well. This postcard probably dates from the period around Deakin’s ‘Fusion’ of the anti-Labor parties into the Commonwealth Liberal Party. George Dunstan was active as a political cartoonist in the period 1899-1922, and also worked as a journalist and a sign writer.

This postcard was a from a set called:

In Borrowed Plumes , a set of colour postcards by Zif calledTheatrical Travesties , published in the NSW Bookstall Co’s ‘Art Series’ (n.d.), one of the few attempts at political satire on Australian postcards according to Cook (p.74)……

By 1904 the Dunstans had two daughters, Sarah and Renée, and were renting a narrow workers’ terrace at 28 Morehead Street, Redfern. Zif’s occupation on Sarah’s birth certificate was given as ‘journalist’, presumably his major source of income. He may therefore have written some of the articles that his drawings accompanied, Dunstan concludes. Between 1904 and 1911, however, he was drawing for several publications including Theatre (cover and drawings), the Australian Worker (only one cartoon known, i.e. ‘Advertising Australia’ 28 January 1909, ill. King II, p.81 [re misleading advertising of utopian conditions for immigrant workmen]), the Bulletin (mainly theatrical caricatures and cartoons, although his daughter claims he was also the magazine’s theatre critic) and the Sunday Times (comic illustrations on the thespian lifestyle, says AD).

Read the full entry for George Duncan from Design & Art Australia Online, a database and e-research tool for art and design researchers.

Looking for assistance? Contact the ESA with your research and collection inquiries. Our membership base consists of highly knowledgable experts and enthusiasts.     … END_OF_DOCUMENT_TOKEN_TO_BE_REPLACED

Applications for stalls OUR NEXT FAIR IS ON SUNDAY 22 September 2020 HAS BEEN CANCELLED DUE TO COVID 19.  We will book fairs for next year shortly. The fair is usually held at the Parkview Room, … END_OF_DOCUMENT_TOKEN_TO_BE_REPLACED

Benefits of membership - 2 journals and 2 newsletters each year; early bird access to the fair; member rates at ESA events and the joy of being part of a society of like minded collectors. When you … END_OF_DOCUMENT_TOKEN_TO_BE_REPLACED