You are here: Home / All stories / Mandy B

SERIES, I HOPE, ON ‘MY FIRST PIECE OF EPHEMERA’, this came up the other day in a pre-isolation discussion with ESA members. The first items we talked about didn’t necessarily turn out to be a focus of later collecting but interesting. 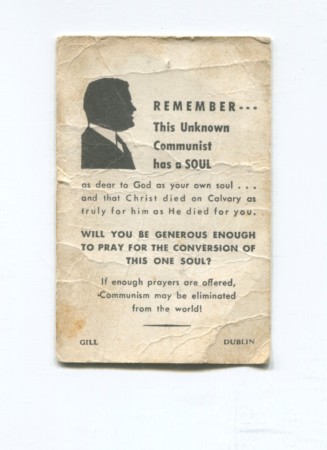 I was working at the State Library, having come to it chiefly as a reader of books. I was introduced to ephemera as part of my job – adding to and organising the political ephemera collection – the Riley and Ephemera Collection. I was happy collecting only for the Library, until in the 1980s a colleague showed me an intriguing little card he had picked up at a church in Sale (I think). I had to have my own.

Probably many moons later I visited the large Roman Catholic church with a spectacular ceiling, and found a supply of the ‘Unknown Communist’ cards. To my surprise I only took one. For probably a decade or two I kept it in my purse anticipating that if I was run over by a bus and someone had to rummage through my belongings this would be a remarkable and memorable find.

Probably in the 2000s, I took it out of my purse and put it into one of my piles/boxes/envelopes of ephemera.

Since I left the Library in the 1990s, my interests in collecting are narrowly Australian, Victorian really,  so I wonder if I came across this card now – would I pick it up.

Looking for something else earlier this year the card came to light again. And I love it still.

Looking for assistance? Contact the ESA with your research and collection inquiries. Our membership base consists of highly knowledgable experts and enthusiasts.     … END_OF_DOCUMENT_TOKEN_TO_BE_REPLACED

Applications for stalls OUR NEXT FAIR IS ON SUNDAY 22 September 2020 HAS BEEN CANCELLED DUE TO COVID 19.  We will book fairs for next year shortly. The fair is usually held at the Parkview Room, … END_OF_DOCUMENT_TOKEN_TO_BE_REPLACED

Benefits of membership - 2 journals and 2 newsletters each year; early bird access to the fair; member rates at ESA events and the joy of being part of a society of like minded collectors. When you … END_OF_DOCUMENT_TOKEN_TO_BE_REPLACED