IT’S TIME TO THINK ABOUT POLITICAL EPHEMERA, WE SHARE A QUOTE AND LINK TO A STORY WRITTEN BY JAMES COCKINGTON IN 2007: 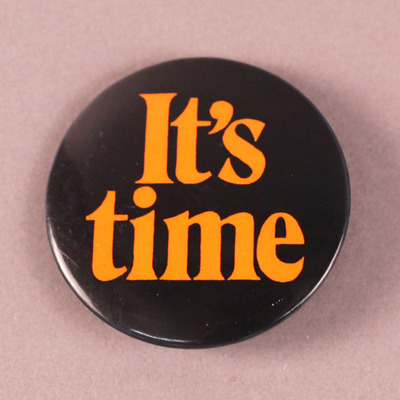 The most memorable of recent times is the 1972 “It’s time” campaign, which was given much credit for Gough Whitlam’s storming victory that year. Thirty five years on, that slogan is still as powerful as ever. The “It’s time factor” is now part of the vernacular and political memorabilia from this campaign is the most sought after.

“It’s time” badges sometimes appear in collectables shops valued as highly as $40 each. An original “It’s time” T-shirt is much harder to find but collectors will happily pay up to $100 for one in mint condition. A Liberals response T-shirt – with the words “not yet” – is even rarer. 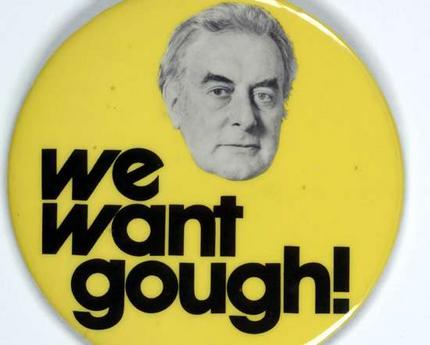 Another collection from a political insider

In 2011, the ABC reported that Graham Freudenberg, who made a huge contribution to Australian political life through his long career as a speechwriter and adviser for Labor leaders such as Gough Whitlam, Bob Hawke and Neville Wran, had given the nation a priceless collection of personal notes, drafts and other documents from his personal archives.

He donated the material to the Whitlam Institute at the University of Western Sydney which hopes to make much of it publicly available online. Among the items is a copy of the original It’s Time election campaign proposal. There is an e-collection (we didn’t find it particularly user friendly, but others might).

During his final few months of office, the iconic Labor PM – who died this morning, aged 98 – set up triple j precursor Double J in 1975 as a means of wooing young voters, but also with the view of setting up a National Youth Radio Network. He was controversially sacked before he could achieve that dream, but Double J – which later rebranded as triple j and has now been rebirthed as a 24-hour digital station – is one of his most enduring achievements.

Looking for assistance? Contact the ESA with your research and collection inquiries. Our membership base consists of highly knowledgable experts and enthusiasts.     … END_OF_DOCUMENT_TOKEN_TO_BE_REPLACED

Applications for stalls open on 1 August 2022. OUR NEXT FAIR IS ON SUNDAY 18 SEPTEMBER 2022 The fair is usually held at the Parkview Room, 340 Camberwell Road Camberwell Victoria. It is part of … END_OF_DOCUMENT_TOKEN_TO_BE_REPLACED

Benefits of membership - two journals and four newsletters each year; early bird access to the fair; member rates at ESA events and the joy of being part of a society of like minded collectors. When … END_OF_DOCUMENT_TOKEN_TO_BE_REPLACED