You are here: Home / All stories / How much paint do I need?

THE FORTHCOMING ISSUE OF THE EPHEMERA JOURNAL OF AUSTRALIA will include the answer to this question, and others using mechanical ephemera.

Does that raise another question, what is mechanical ephemera?

Here is an example: 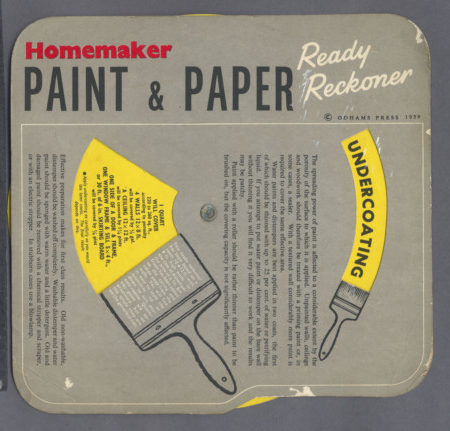 This was produced in Watford, England in 1959 and circulated here in Australia.  Of interest re Watford:

By the 1920s, printing had become the biggest industry in Watford. The biggest printers in the town were Sun Printers Ltd and Odhams Press. Watford was the biggest printing centre in the world and many advances in printing were made in Watford. During World War 11 the prints were taken over by the government who used them to print propaganda. After the war, the printing industry began going into decline. Union activity was common in Watford and advances in technology meant much of the industry became obsolete. Odhams Press closed down in 1978 and Sun Printers moved out of Watford during the 1980s after market reforms allowed it to do so.  Thank you wikipedia.

The journal is sent out in hardcopy to all members of the Society – membership is $40 per annum and includes two issues of the journal and early bird entry to our fairs. Join here.

Looking for assistance? Contact the ESA with your research and collection inquiries. Our membership base consists of highly knowledgable experts and enthusiasts.     … END_OF_DOCUMENT_TOKEN_TO_BE_REPLACED

Applications for stalls OUR NEXT FAIR IS ON SUNDAY 30 May 2021. The next fair will be on 26 September 2021. The fair is usually held at the Parkview Room, 340 Camberwell Road Camberwell Victoria. … END_OF_DOCUMENT_TOKEN_TO_BE_REPLACED

Benefits of membership - 2 journals and 2 newsletters each year; early bird access to the fair; member rates at ESA events and the joy of being part of a society of like minded collectors. When you … END_OF_DOCUMENT_TOKEN_TO_BE_REPLACED