You are here: Home / All Posts / Font and more font

ARE YOU SOMEONE WITH AN EAGLE EYE FOR DETAIL?DO YOU WANT YOUR COLLECTION TO BE ORGANISED BY, SOME PRINCIPLE?DO YOU NEED TO TAKE CERTAIN ROUTES TO AVOID AWFUL SIGNS? 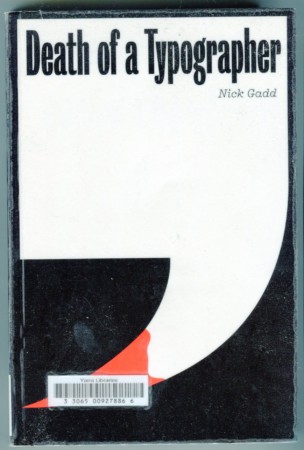 Then this local crime novel may be for you. The main characters are a graphic designer, Martin, and journalist, Lucy drawn together by the death of a printer. Martin Kern (means to adjust the spacing between (characters) in a piece of text to be printed) works occasionally as an expert witness in trials.

The trial had involved an architect accused of murdering a woman found with a revolver in her hand and a suicide note on her desk. Called in to provide an opinion, Martin had spotted that the note was typed in Lucida Grande, a font only found on Mac computers, whereas the victim used a PC…

The investigation is complicated as the body is lying in a position that mimics a new font possibly designed by the famed Dutch typographer Floogenstraten…The story, in 24 chapters, each with a different font title page, might increase your obssessive tendencies and your understanding of printing, design studios, font and more. In the course of the novel sorry to say we read about posters and flyers from the golden age of Floogenstraten being faked for uninformed collectors to buy.

Looking for assistance? Contact the ESA with your research and collection inquiries. Our membership base consists of highly knowledgable experts and enthusiasts.     … END_OF_DOCUMENT_TOKEN_TO_BE_REPLACED

Applications for stalls OUR NEXT FAIR IS ON SUNDAY  26 September 2021 HAS BEEN CANCELLED. The fair is usually held at the Parkview Room, 340 Camberwell Road Camberwell Victoria. It is part of the … END_OF_DOCUMENT_TOKEN_TO_BE_REPLACED

Benefits of membership - 2 journals and 2 newsletters each year; early bird access to the fair; member rates at ESA events and the joy of being part of a society of like minded collectors. When you … END_OF_DOCUMENT_TOKEN_TO_BE_REPLACED