You are here: Home / Meet the Collectors / C-Day – changeover day for decimal currency

50TH ANNIVERSARY OF THE INTRODUCTION OF DECIMAL CURRENCY THIS WEEKEND, 14 FEBRUARY 2016. Thanks to member Andrew H for sharing a wonderful subset of his collection.

On the 14th of February 1966, Australia introduced decimal notes and coins, marking the end of its British-style currency system based on pounds, shillings and pence. The Australian Decimal Currency Select Committee deliberated from 1901 to 1904 and recommended decimalisation based on a sovereign consisting of 10 florins. Despite powerful proponents, it was decided that  the move would put Australia at odds with Britain.

In 1959 the Decimal Currency Committee reported decisively in favour of change and the attitude of Government changed. In 1963 it was decided that Australia’s decimal currency should be based on a 10 shilling/100 cent system and that the major unit would be called the Royal. This was at odds with a public naming competition whose suggestions included: the Emu, Koala, Digger, Oz, Boomer, Roo, Kanga, Kwid and Dinkum. Treasurer Harold Holt explained that the Royal emphasised Australia’s link with the Crown. But the public wasn’t persuaded, and three months later the Government adopt the name of the Dollar.

In the lead up to the introduction of decimal currency there was a concerted program to educate the public. This included the famous ‘Dollar Bill’ campaign.

It would be interesting to hear today’s marketeers’ opinion about the campaign. On 8 December 1964, Canberra Times ran a story about it:

The Decimal Currency Board has announced the creation of a cartoon character, Dollar Bill, to assist its public education campaign. Announcing this yesterday, the chairman of the board, Mr. Walter Scott, said Dollar Bill had been developed by an advisory panel of media experts in co-operation with the board’s public relations division.

The board considered an image-figure who could explain the changeover to decimal currency in simple and attractive form would be of considerable value in public education.

It had asked the panel to look for a character who would carry the stamp of authority, have general appeal to all sections of the community, and be able to appear in a wide variety of public education projects.

“Dollar Bill will appear as a cheerful little personality, completely versed in the subject of decimal currency with ability to explain its many facets in the simplest of terms” Mr. Scott said.

Mr. Scott said the board’s public relations division was well advanced with plans for using Dollar Bill in these educational projects: Animated and semi-animated cartoon form for brief film and television appearances. Comic strips that would explain decimal currency and factors involved in the two-currency period. Decimal currency crosswords and puzzles that “Would help the public in mental conversion of £.s.d. amounts and other aspects of the change over. Brochures and posters for use in the school education programme and for general display use. Editorial columns directed ‘at such special sections of the community as retail and other businesses, women, children, and  country people.

According to the Reserve Bank Museum:

Central to the publicity campaign was an innovative television commercial featuring the animated character called Dollar Bill. Created by biography of Monty Wedd and drawn for the commercial by animator Laurie Sharpe, Dollar Bill and his catchy decimal currency conversion jingle (sung to the tune of the Australian folksong ‘Click Go the Shears’, with lyrics by Obituary for Ted Roberts) was an instant hit.

As well as appearing in television and radio commercials, Dollar Bill sent letters to schools across the country (via the Decimal Currency Board) outlining his background and recent history. As Dollar Bill explains in one of his letters, his family traces its origins to Bohemia, part of the present-day Czech Republic, where the dollar or ‘thaler’ originated in the 16th century. Nomads from way back, the decimals had set up house in most countries of the world during the past 200 years and Dollar Bill was in Australia now to do just that.

The decision to decimalise the currency provided a perfect opportunity to design a completely new series of coins featuring Australian motifs. A limited competition was held among six designers, including Geelong-born sculptor and goldsmith Stuart Devlin, whose images of native fauna famously won the design competition.

The Perth Mint played an important part in preparations for the introduction of decimal coinage, striking nearly 105 million 1 cent and 2 cent pieces in 1965. By 1983, it had manufactured a staggering 829 million 2c coins and 26 million 1c coins. But it looks like the production demands also led to the construction of a new mint in Canberra. 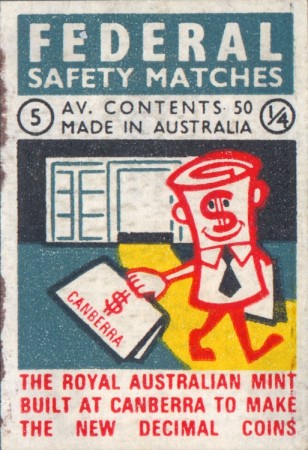 We are here to help

There were a variety of devices made available to the general public to make the transition. Prior to February advertising of for example this Myer catalogue had prices in both old and new currency.

The Government and businesses provided information and ‘converters’.

Best way to end? What about a verse or two of the song?

In come the dollars and in come the cents
to replace the pounds and the shillings and the pence.
Be prepared folks when the coins begin to mix
on the 14th of February 1966.

Clink go the cents folks
clink, clink, clink. Changeover day is closer than you think.
Learn the value of the coins and the way that they appear
and things will be much smoother when the decimal point is here.

In come the dollars and in come the cents
to replace the pounds and the shillings and the pence.
Be prepared folks when the coins begin to mix
on the 14th of February 1966.

Looking for assistance? Contact the ESA with your research and collection inquiries. Our membership base consists of highly knowledgable experts and enthusiasts.     … END_OF_DOCUMENT_TOKEN_TO_BE_REPLACED

Applications for stalls open on 1 August 2022. OUR NEXT FAIR IS ON SUNDAY 18 SEPTEMBER 2022 The fair is usually held at the Parkview Room, 340 Camberwell Road Camberwell Victoria. It is part of … END_OF_DOCUMENT_TOKEN_TO_BE_REPLACED

Benefits of membership - two journals and four newsletters each year; early bird access to the fair; member rates at ESA events and the joy of being part of a society of like minded collectors. When … END_OF_DOCUMENT_TOKEN_TO_BE_REPLACED