You are here: Home / All stories / Artists, kookaburras & ephemera

THE ZOOM SESSION ON MONDAY 11 JULY AT 7.30PM, TOOK US THROUGH VARIOUS TYPES OF EPHEMERA AND APPROACHES TO ILLUSTRATING. There is the work of nature artists and of women artists whose subjects include birds and plants.

Other artists may be less well known – this New Zealander Maisie Carte probably fits that bill.

Maisie Carte, now appearing with the George Marlow Dramatic Co., is also a clever artist with the pencil. She has a happy sense of humor, as two series of post-cards designed by her show. They are the Wattle series, in which our national bloom is cleverly treated to form quaint human figures. The titles are formed by a smart play upon the word wattle; for instance, “These are wattle grow into soldiers,” under the quaintest little wattle cadet figures; and another, “This is wattle make a prosperous nation,” under a unique bride and bridegroom. Equally clever are the Native Bear series, in which the leading question of the day is used. In one a slighted bear is peeping out at his chum, who wears military cap and belt, and is surrounded by adoring girls. Miss Carte was formerly with the Fred Niblo Co. From Table Talk 15 June 1916

Problem noted – this is Maisie’s work but a koala not a kookaburra – will update when I find that elusive image. 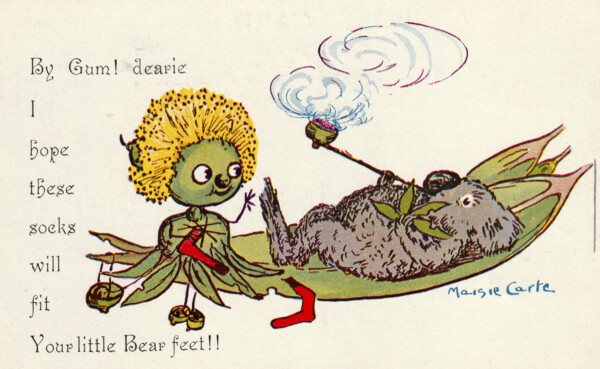 Here is the missing kookaburra with a very esoteric image and message. 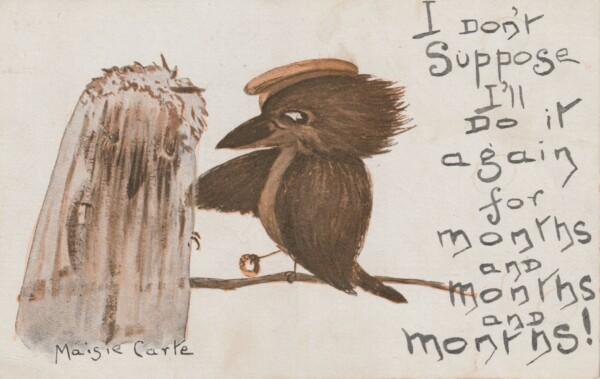 Looking for assistance? Contact the ESA with your research and collection inquiries. Our membership base consists of highly knowledgable experts and enthusiasts.     … END_OF_DOCUMENT_TOKEN_TO_BE_REPLACED

Applications for stalls open on 1 August 2022. OUR NEXT FAIR IS ON SUNDAY 18 SEPTEMBER 2022 The fair is usually held at the Parkview Room, 340 Camberwell Road Camberwell Victoria. It is part of … END_OF_DOCUMENT_TOKEN_TO_BE_REPLACED

Benefits of membership - two journals and four newsletters each year; early bird access to the fair; member rates at ESA events and the joy of being part of a society of like minded collectors. When … END_OF_DOCUMENT_TOKEN_TO_BE_REPLACED