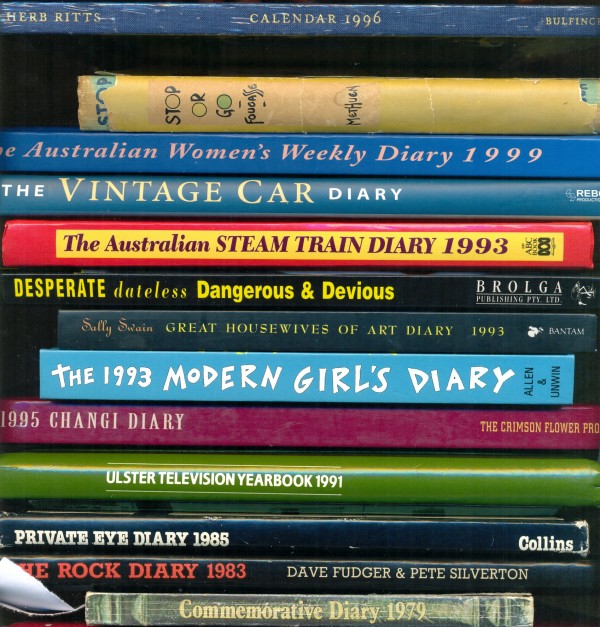 ESA MEMBER RICHARD FELIX COLLECTS OLD AND CURRENT DIARIES. Richard has more than 600 diaries including one for 1939 and 2015. There is nothing written in his 1939 diary (he prefers the diaries not to have been used).

How did the interest in diaries start?

His Dad used to bring diaries home (the firm he worked for gave them away). Richard’s sister wrote in hers (she was 5 years older) and Richard kept his but at 6 years of age, didn’t use them.

The big idea for a collection

Richard may be a bit unusual here – in 1973 Richard was chatting with a group of printing friends about the millenium; and someone suggested they should all collect something to do with printing for the millenium. They agreed and one was going to collect a newspaper for every day, he gave up on this. But he did keep the front page of dozens and dozens of newspapers before he threw the towel in.

Richard started with calendars with the aim of collecting one for each year from 1901 to 2000 but switched to diaries. (He was working somewhere where they printed calendars and so he had  access to dozens of them.) But he talked to his sister about the collecting idea and she said the old man still brought home diaries and had the old ones. So Richard went home, picked them up and changed direction even though there were only 5 or 6 diaries at home. He went to NZ in 1974, and stayed until 1978 but only added about 5 or 6 items to the diary collection.

From 1990, Richard started hunting for diaries seriously.  He did the op shops and at one shop in Mont Albert the lady put them aside for him. He has some good diaries from Mont Albert.  He put up a notice at Safeways. He let people know what he was looking for had a good collection directed to him via Rick Milne.

Richard isn’t just collecting single diaries for a year. He does want at least one for each year.

Richard has a lot of Australian diaries and diaries from all around the world, diaries featuring the work of photographers, professional diaries for nurses, engineers et cetera, women’s diaries, hobby diaries, comic diaries, a few sports diaries.

He does stray from diary collecting to really interesting day books, birthday books.

Richard is yet to find examples for the early decades.

He is looking for diaries for:

Here are some diaries from the collection. if you can help Richard add to his collection please contact him on 0424 071 713.

A lot of diaries purport to be the first of a series but never go beyond the first year. Here is an interesting image including a modified snow dome of the Sydney skyline to the right of Uluru.

Welcome to the first edition of the Wizards of Oz Diary.

The creative images featured through the diary are taken from Creative Source Australia, The Wizards of Oz, Book 5. Armadillo Publishers wish to thank the illustrators and photographers who have participated.

As far as Richard knows, there was no other edition.

Richard has benefited from finds made by other ESA members, especially Brian Watson and Trevor Clark. Trevor has sold a lot of Phantom related material at ESA fairs (and elsewhere).

This Phantom diary was purchased from Trevor Clark at an Ephemera Fair.

Examples from the collection

We show you the dust jacket and the backboard. The publishers described this diary as:

the fashionable book for Christmas 1938 and will enliven 1939 from start to finish.

a British cartoonist best known for his editorship of Punch magazine and his World War 2 warning propaganda posters. He also designed many posters for the London Underground.

Here are some sample pages from the 1939 diary which is littered with cartoons and a daily ‘fact’. Are the day captions real?

When did the handy pages at the back of the diary for information such as phone numbers first appear? By the by, we note that the dust jacket has a man on the telephone as its key image.

This is of course a genre of its own. Here is another good one, from the English magazine, Private Eye.

Every double page has a lovely page of unintended amusement from English newspapers. This is of particular interest to Richard as he worked for many years as a type-setter.

Juxtaposition of stories here show some prescience as there is a story about the local ‘raper/haberdashery shop’ above a photo of Rolf Harris.

What important information should be at a hand in the diary?

According to local Kaz Cooke’s guide for girls – clothing and shoe sizes.

Diaries for men (Is this a diary?)

This volume is called a diary but once you open it up to look at the pages for days and so entries, one has to start to wonder about what constitutes a diary.

The Macquarie Dictionary  (St Leonard’s NSW, 1981) defines diary as ‘1. daily record, esp of the writer’s own experiences or observations or 2. a book for keeping such a record or for noting engagements and appointments’.

It seems that recording future or past events play second fiddle to pictures of cars in this diary.

Here is a page that the collector can enjoy – car pics and reproductions of ephemera.

This seems to be designed for the car lover with little love for diaries who wanted to be able to claim ‘Yes I have a diary’ but in fact has a lovely picture book for the grown up car enthusiast.

Pleasure from a beautiful diary

There are at least 2 schools of thought on diaries – very practical with nary a sketch or saying to liven the day. Or, like the Vintage Car Diary, the diary might be filled with beautiful photographs, graphics or information to improve the day. Yes, we favour the latter. Here are a couple from Richard.

The arts diary compiled and published by Maria Prendergast drew on works submitted by galleries; the selection is of traditional and contemporary work by established, mid-career and young artists. Great idea and good support for the local art scene.

Here is one of Richard’s diaries featuring photographs/photographers. Richard advises that in the US, diaries are called calendars – see the title below to what is definitely a 100+ page bound publication.

Don’t forget Richard would welcome diaries being directed his way – you can contact him on 0424 071 713.

Looking for assistance? Contact the ESA with your research and collection inquiries. Our membership base consists of highly knowledgable experts and enthusiasts.     … END_OF_DOCUMENT_TOKEN_TO_BE_REPLACED

Applications for stalls open on 1 August 2022. OUR NEXT FAIR IS ON SUNDAY 18 SEPTEMBER 2022 The fair is usually held at the Parkview Room, 340 Camberwell Road Camberwell Victoria. It is part of … END_OF_DOCUMENT_TOKEN_TO_BE_REPLACED

Benefits of membership - two journals and four newsletters each year; early bird access to the fair; member rates at ESA events and the joy of being part of a society of like minded collectors. When … END_OF_DOCUMENT_TOKEN_TO_BE_REPLACED