You are here: Home / All stories / Andrew H

Andrew H TELLS US ABOUT HIS CONVERSION TO PAPER – TO EPHEMERA

I started with Vida Goldstein.

The collecting bug bit me quite early in life. By the age of 15, having progressed through stamps and coins, then losing interest in both, I found my first piece of ephemera, and have been hooked ever since.

I had begun to develop an interest in politics and it’s machinations during the events surrounding the dismissal of the Whitlam government in 1975. I remember it as a heady time that produced a lot of political ephemera. Leaflets, posters, badges, newspapers and various other media saturation, supplied opinions, news and counter arguments.

In the wake of these events I started to broaden my political collecting interests, wondering what else might be out there. Browsing the stalls one day at every collectors favourite Sunday market destination, Camberwell, I found this informative poster promoting an appearance by the Australian Suffragist, Political Candidate and Peace Activist Vida Goldstein, (1869-1949). 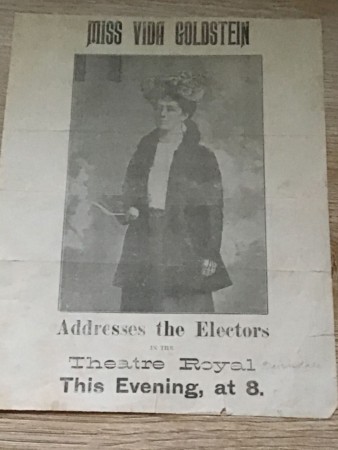 This piece sent me off into many different areas of collecting political ephemera. About a decade later when the Ephemera Society was established in Australia, I’d amassed a sizeable collection. Although not always of the calibre or significance of this first piece.

I’ve since diversified into all manner of collections as my tastes and focuses have changed. However it is this Vida Goldstein poster that opened up the endless possibilities of ephemera, to a then 15 year old novice collector.

Looking for assistance? Contact the ESA with your research and collection inquiries. Our membership base consists of highly knowledgable experts and enthusiasts.     … END_OF_DOCUMENT_TOKEN_TO_BE_REPLACED

Applications for stalls OUR NEXT FAIR IS ON SUNDAY 22 September 2020 HAS BEEN CANCELLED DUE TO COVID 19.  We will book fairs for next year shortly. The fair is usually held at the Parkview Room, … END_OF_DOCUMENT_TOKEN_TO_BE_REPLACED

Benefits of membership - 2 journals and 2 newsletters each year; early bird access to the fair; member rates at ESA events and the joy of being part of a society of like minded collectors. When you … END_OF_DOCUMENT_TOKEN_TO_BE_REPLACED