3UZ started broadcasting in March 1925 as ‘The Voice of Victoria’. It had the first B-class licence which meant that it could broadcast paid advertising rather than rely on income from subscribers. (3UZ was sold in 1985 to a horse and greyhound racing group and became Radio Sport 927 in 1996.) In the mid-1960s, 3UZ was one of the first Melbourne radio stations to adopt the Top 40 music format; this made 3UZ enormously popular with about one third of Melbourne radios tuned to it. 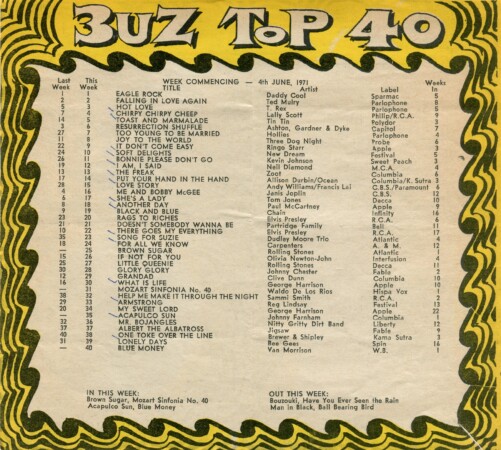 3UZ Top 40 is a singles’ chart tracking the ranking and movement of songs with a slightly psychedelic style border. It includes notes on the bottom ‘IN THIS WEEK’ and ‘OUT THIS WEEK’. The verso has a photograph of a DJ and identifies the album of the week. Size: 15.5×16.4cm. It also advertises a changing feature be it a competition or a service.

The ‘3UZ official music survey’ is on better quality paper, and the note that ‘The popularity of the singles and albums is based on an authentic official survey of record sales in Melbourne and suburbs correlated with listeners’ requests on 3UZ.’ Size: 19×12.5cm.

The content of the survey and information on the verso changes regularly suggesting that it was hard to identify what listeners wanted. From our sample, the verso was radio personality photos and Top 10 Albums in November 1971, still with some colour on the top of the verso.

From 10 December 1971 to 9 June 1972, the verso had colour and a text only advertisement for programming:

The final version in our bundle  has the verso used in the same was as  at the start of the survey – promoting 3UZ’s programme hosts bu this time as a group: 18 May-21 September 1973:

Looking for assistance? Contact the ESA with your research and collection inquiries. Our membership base consists of highly knowledgable experts and enthusiasts.     … END_OF_DOCUMENT_TOKEN_TO_BE_REPLACED

Applications for stalls open on 1 August 2022. OUR NEXT FAIR IS ON SUNDAY 18 SEPTEMBER 2022 The fair is usually held at the Parkview Room, 340 Camberwell Road Camberwell Victoria. It is part of … END_OF_DOCUMENT_TOKEN_TO_BE_REPLACED

Benefits of membership - two journals and four newsletters each year; early bird access to the fair; member rates at ESA events and the joy of being part of a society of like minded collectors. When … END_OF_DOCUMENT_TOKEN_TO_BE_REPLACED